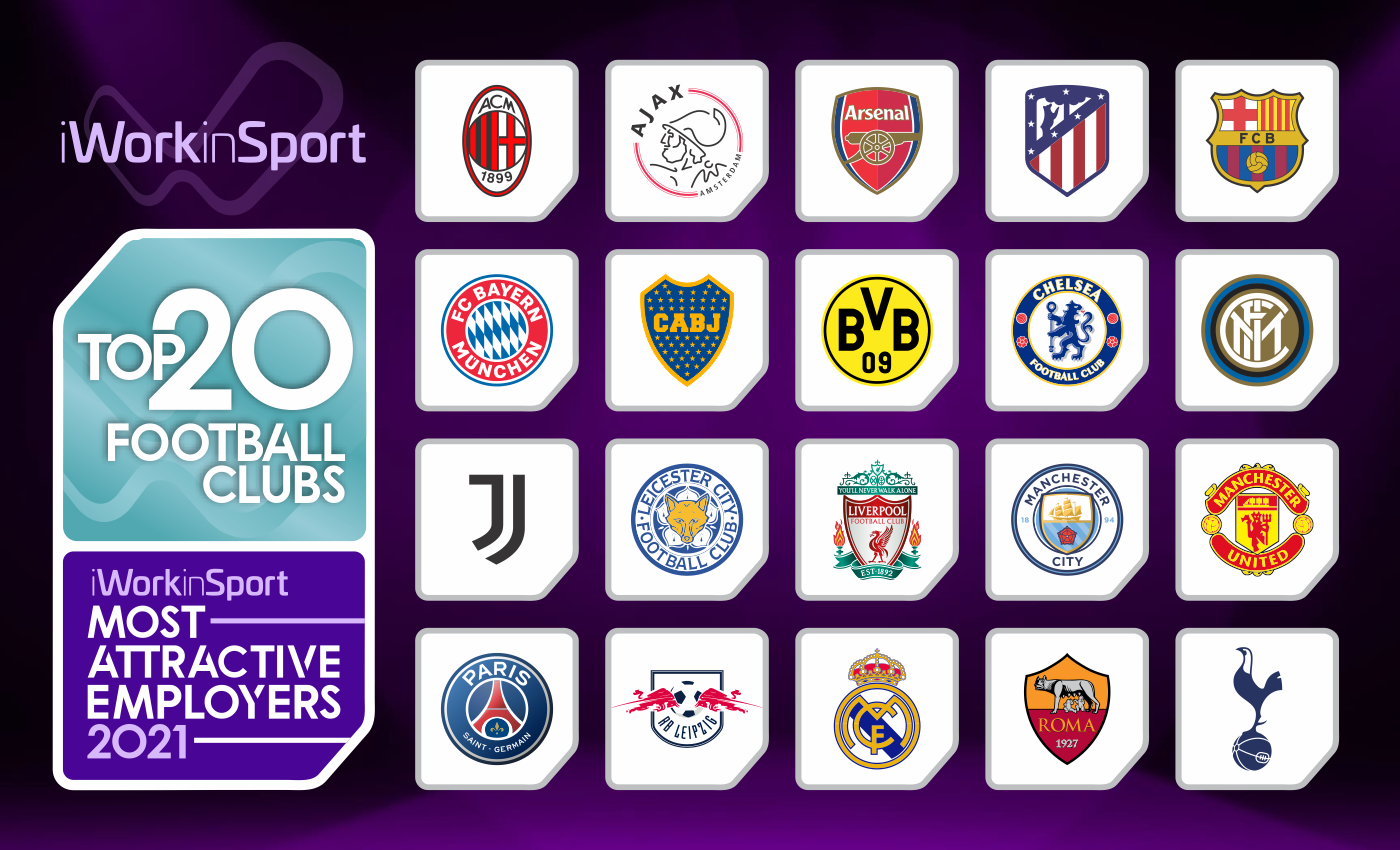 Nineteen European teams, plus one from South America, were named “Top 20” in the list of Most Attractive Employers in Sport – in the category Football Clubs – in a survey conducted by the Switzerland-based company iWorkinSport.
The study surveyed more than a thousand people from all continents, with the majority already working in sport, and asked them a simple question: “If you could choose to work anywhere in sport, where would that be?”
At first, the respondents chose organisations divided into nine categories, and at the end, they indicated one single preferred choice, overall – the “Employer of their Dreams”.
In the category Football Clubs, the 20 most voted teams were, in alphabetical order:
AC Milan (ITA)
Ajax (NED)
Arsenal (ENG)
Atlético Madrid (ESP)
Barcelona (ESP)
Bayern Munich (GER)
Boca Juniors (ARG)
Borussia Dortmund (GER)
Chelsea (ENG)
Inter Milan (ITA)
Juventus (ITA)
Leicester City (ENG)
Liverpool (ENG)
Manchester City (ENG)
Manchester United (ENG)
Paris Saint-Germain (FRA)
RB Leipzig (GER)
Real Madrid (ESP)
Roma (ITA)
Tottenham Hotspur (ENG)
English clubs account for seven of the 20 teams on the list, while Italy has four representatives. Other countries that appear on the list are Spain and Germany - each with three clubs - plus France, the Netherlands and Argentina – each with one team.
The iWorkinSport Most Attractive Employers 2021 report will be launched on the 21st May 2021, at the iWorkinSport Virtual Job Fair. The publication will feature the final rankings for each category plus insightful job market trends’ analysis.
In the coming days, iWorkinSport will start to post the shortlists of the Top 20 Most Attractive Employers in Sport, in each category. To find out which companies are shortlisted, follow iWorkinSport’s professional and social media channels: LinkedIn, YouTube, Facebook, Instagram, Twitter and iworkinsport.com.
More about The Most Attractive Employers in Sport survey
The survey, conducted from mid-December 2020 to mid-February 2021, had more than 1,000 respondents, from 86 countries, with 92% having at least a bachelor degree and 62% with postgraduate education, while 68% already work in sport. Detailed demographics data will be available in the report.
About iWorkinSport
iWorkinSport connects employers and talent, as well as promotes education and career growth in Sport.
iWorkinSport was created in 2017 with the aim to organise the first truly international career fair focused on the sports industry. It enables some of the most renowned organisations to meet, interview and recruit students and alumni from the most prestigious sport management programmes in the world.
World-class sports organisations such as the International Olympic Committee (IOC), FIFA, UEFA, FIBA, Adidas, Juventus FC, Manchester City FC, Infront, IMG, TEAM Marketing, the NBA, Eurovision, Soccerex, the World Football Summit and many others have been in attendance, recruiting at the event.
In addition to the traditional Job Fair, iWorkinSport organises two online events: the Education Virtual Expo and the Virtual Job Fair.
Contact:
For more information, contact info@iworkinsport.com

iWorkinSport announces The Most Attractive Employers in Sport report

Live interviews: Re-watch the episodes of the 3rd season

Live Interview with Alex Norman, Founder of Diversity in the Business of Sport (DiBS)