FIFA, IOC and UEFA named the Most Attractive Employers in Sport, again in 2022 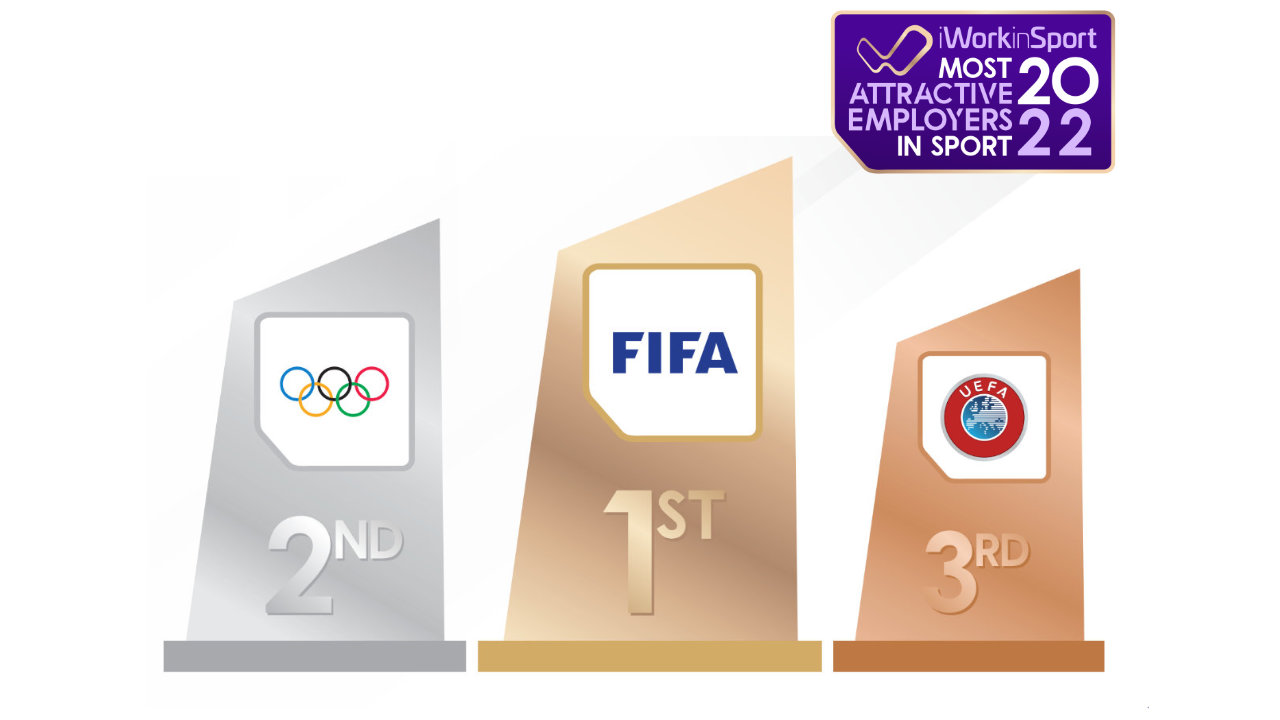 FIFA, football’s world governing body, the International Olympic Committee and UEFA, the continental governing body for football, are the Top 3 Most Attractive Employers for those who already work, or wish to work in sport, for the second year running, according to a report published by iWorkinSport.
The American sporting goods giant Nike also kept the same position as the previous year (4th), while the National Basketball Association (NBA) climbed four places to clinch a position in the Top 5 Overall.
The study surveyed more than a 1,600 people from all continents, with the majority already working in sport, and asked them a simple question: “If you could choose to work anywhere in sport, where would that be?”. At first, the respondents chose organisations divided into ten categories and, at the end, they indicated one single preferred choice, overall – the “Employer of their Dreams”.
Despite a few changes in positions, the Top 20 ranking, in the category Overall, had only three new entries, compared to 2021. Manchester City FC (16th), FIBA (17th) and Ferrari (20th), replaced the Premier League, AC Milan and the ATP Tour as the respondents' top 20 favourite places to work in sport.
The publication also features rankings of the most attractive employers in sport divided in the following categories:  Football Clubs, Sports Teams (other than Football), Sports Teams in the USA, Sports Leagues, Sports Governing Bodies, Event Organisers, Sports Marketing Agencies, Sponsors, Sporting Goods Companies and Sports Tech.
Additionally, the report presents the aspects that candidates rate as most important when deciding where they would like to work.
In terms of types of organisations, sports professionals showed a preference for the excitement of working at a sports team (32% of the responses). Governing bodies (24%), Event Organisers (15%) and Sports Leagues (11%) follow. Sports Marketing agencies, sponsors and sporting goods brands were also named as places candidates would prefer to work.
More about The Most Attractive Employers in Sport 2022
The survey was conducted from 20 December 2021 to 15 March 2022 and had more than 1,600 respondents, from 111 countries, with 90% having at least a bachelor degree and 63% with postgraduate education, while 79% already work in sport. Detailed demographics data is available in the report.
DOWNLOAD THE FULL REPORT HERE.
The Most Attractive Employers in Sport Awards 2022
The first edition of The Most Attractive Employers in Sport Awards happened on Thursday, May 19th, at the Olympic Museum, in Lausanne, Switzerland, as part of the iWorkinSport Job Fair. Talent Acquisition and HR representatives from the companies exhibiting at the event attended a VIP dinner and awards ceremony. See pictures here and a short video here.
About iWorkinSport
iWorkinSport is the Global Hub for everything on career, recruitment and education in sport.
The company connects and provides solutions and opportunities to all stakeholders in the field of career development in sport - be it candidates, employers, employees, students, academic programmes, HR professionals, recruitment agencies, consultants, career coaches, etc. It also produces, aggregates and curates content and knowledge relevant to career in sport.
iWorkinSport was created in 2017 with the aim to organise the first truly international career fair focused on the sports industry. It enables some of the most renowned organisations to meet, interview and recruit students and alumni from the most prestigious sport management programmes in the world.
World-class sports organisations such as the International Olympic Committee (IOC), FIFA, UEFA, FIBA, Adidas, Juventus FC, Manchester City FC, Infront, IMG, TEAM Marketing, the NBA, Eurovision, Soccerex, the World Football Summit and many others have been in attendance, recruiting at the event.
In addition to its traditional Job Fair, iWorkinSport organises two online events: the Education Virtual Expo and the Virtual Job Fair.
Contact:
For more information, contact info@iworkinsport.com

iWorkinSport celebrates 5 years with its best job fair to date

iWorkinSport celebrates 5 years with its best job fair to date